Battle of Arcadiopolis (970 AD) : The Byzantine general Bardas Skliros defeated all the powerful armies of Eastern Europe in one single battle

The Battle of Arcadiopolis was fought in 970 between a Byzantine army under Bardas Skleros and a Rus' army, the latter also including allied Bulgarian, Pecheneg and Hungarian (Magyar) contingents. In the preceding years, the Rus' ruler Sviatoslav had conquered Bulgaria, and was now menacing Byzantium as well. The Rus' force had been advancing through Thrace towards Constantinople when it was met by Skleros' force. Having fewer men than the Rus', Skleros prepared an ambush and attacked the Rus' army with a portion of his force. The Byzantines then feigned retreat, and succeeded in drawing off the Pecheneg contingent into the ambush, routing it. The remainder of the Rus' army then panicked and fled, and suffered heavy casualties from the pursuing Byzantines. The battle was important as it bought time for the Byzantine emperor John I Tzimiskes to settle his internal problems and assemble a large expedition, which eventually defeated Sviatoslav the next year. 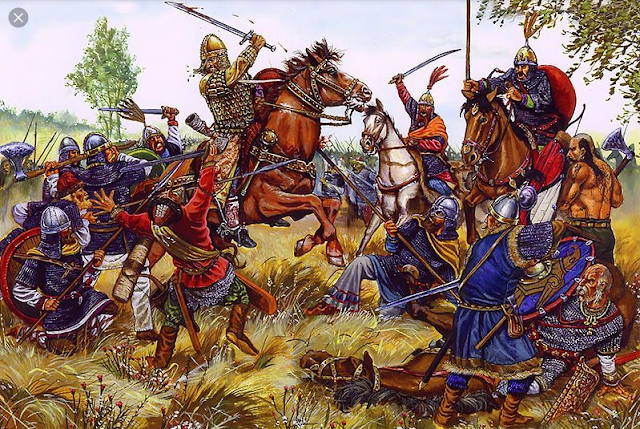 In 965 or 966, a Bulgarian embassy visited the Byzantine emperor Nikephoros II Phokas (r. 963–969) at Constantinople to receive the annual tribute that had been agreed by the two powers as the price of peace in 927. Phokas, flush and self-confident from a series of victories against the Arabs in the East that had led to the recovery of Crete, Cyprus and Cilicia, refused to comply, and even had the envoys beaten up. He followed this up with a show of military strength, by sending a small force to raze a number of Bulgarian border posts in Thrace. It was a clear declaration of war, but Nikephoros' forces were largely preoccupied in the East. Thus the emperor turned to the traditional Byzantine expedient of turning one of the peoples living further north, in modern-day Ukraine, against Bulgaria. He sent an ambassador, the patrikios Kalokyros, to Sviatoslav, ruler of the Rus' with whom the Byzantines had maintained close relations. Sviatoslav enthusiastically responded, and invaded Bulgaria in 967 or 968 in a devastating raid, before returning home to defend his capital against a Pecheneg attack. This forced the Bulgarian tsar, Peter I, to the negotiating table, agreeing to terms favourable to Byzantium. However, this brief sojourn also awakened in Sviatoslav the desire to conquer Bulgaria and establish his own realm there. He returned in force in July or August 969 and conquered the country within a few months. Nikephoros' scheme had backfired dramatically: instead of peace, a new and formidable foe had appeared in the Balkans, and a large part of the Bulgarian nobility appeared to side with the Rus' prince. The emperor, however, was murdered in December 969, and it fell to his successor, John I Tzimiskes (r. 969–976), to deal with the Rus' threat. 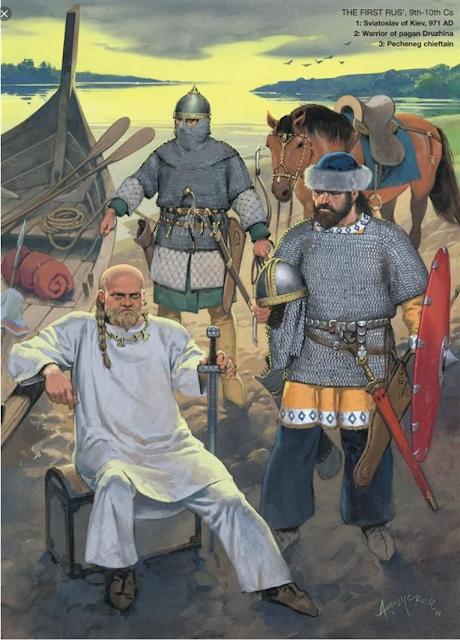 Sviatoslav now turned his sights on Byzantium, and to John's entreaties for peace he allegedly answered that the Empire should abandon its European territories to him and withdraw to Asia Minor. Tzimiskes himself was preoccupied with consolidating his position and with countering the unrest of the powerful Phokas clan and its adherents, and delegated the war in the Balkans to his brother-in-law, the Domestic of the Schools Bardas Skleros, and to the eunuch stratopedarches Peter. They were to winter in Thrace and raise an army, whilst sending spies to discover Sviatoslav's intentions. At the news of this, a powerful Rus' force, along with many Bulgarians and a Pecheneg contingent, was sent south over the Balkan Mountains. After sacking the city of Philippopolis (Plovdiv) in Thrace, they bypassed the heavily defended city of Adrianople and turned towards Constantinople. The size of the Rus' army, and whether it comprised the entirety of Sviatoslav's forces or just a division, is unclear. John Skylitzes, for instance, implies that this was the entire Rus' army, numbering an incredible 308,000 men, but the contemporary Leo the Deacon reports that it was a detachment of "over 30,000 men". It is clear, that the Byzantines were considerably outnumbered, and that the Rus' force at Arcadiopolis included significant numbers of Bulgarians, as well as allied contingents of Pechenegs and "Turks" (i.e. Magyars). 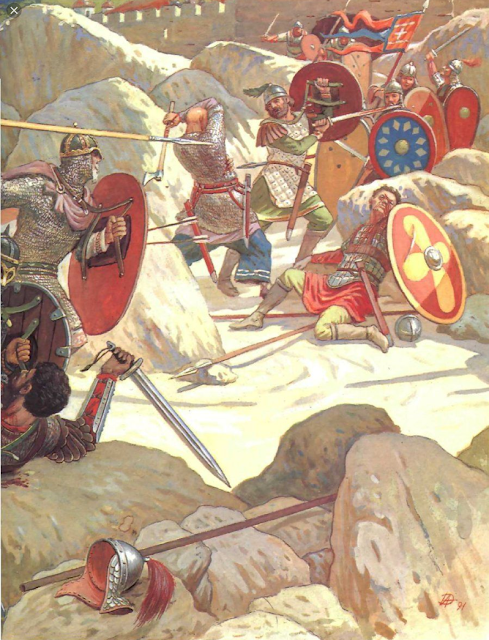 Bardas Skleros or Sclerus was a Byzantine general who led a wide-scale Asian rebellion against Emperor Basil II in 976–979. Bardas belonged to the great family of the Skleroi, which owned enormous estates at the eastern outskirts of Asia Minor. His mother Gregoria descended from Basil I's brother Bardas. The greatest coup of his early career was a brilliant defense of Constantinople against the army of Svyatoslav I of Kiev in 970. During the Battle of Arcadiopolis, he reportedly managed to inflict as many as 20,000 casualties on the Rus, while the campaign claimed the lives of merely 25 Greek soldiers. After he had shown himself equal to dealing with the fiercest enemies of Byzantium, Bardas became a trusted advisor to John I Tzimiskes, who was his brother-in-law. "The truth was, the men who had enrolled in Skleros's army were no longer divided in their loyalties: every one of them was a declared rebel. Their leader inspired them with his own resolute determination and bound them into one coherent body. By favours he won their loyalty, by his kindliness he earned their devotion. He reconciled their differences, ate at the same table as his men, drank from the same cup, called them by name, and by his flattery bound them to his allegiance" (Michael Psellos). The bloodline of Bardas Skleros continued. A grandson, Basil Skleros, was married to a sister of Emperor Romanos III. One of Basil's daughters, married Constantine Monomachos, who would become Emperor, while Basil's granddaughter Maria, became mistress of Constantine. One of these women was the grandmother of Vladimir Monomakh, Great Prince of Russia. 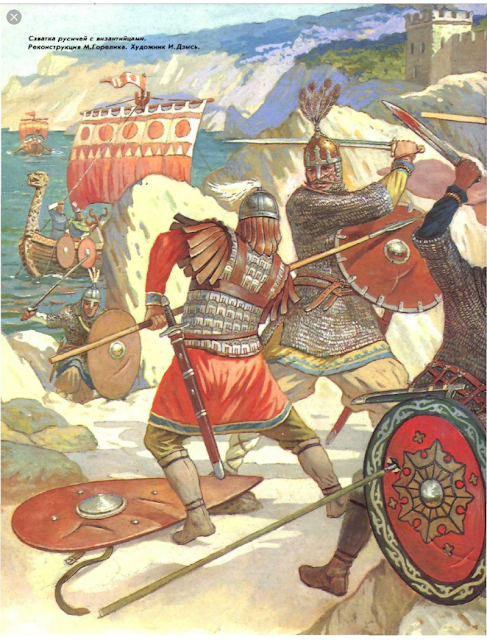 Skleros then quickly assembled a force of ten to twelve thousand men and set out to meet the Rus'. The two armies met near Arcadiopolis (Turkish Thrace), some 80 km west of Constantinople. The two primary accounts on the Byzantine side differ on the preliminaries of the battle: Leo the Deacon reports that Skleros sent a scouting detachment ahead under the patrikios John Alakaseus, and then gave battle after only a day, but the later chronicle of Skylitzes reports that for a few days, Skleros with his men remained within the walls of Arcadiopolis as the Rus' encamped nearby, and refused to come out and meet them in battle despite their repeated challenges for him to do so. According to Skylitzes, the Rus' quickly became convinced that the imperial army was too afraid to face them; consequently they roamed about the countryside plundering, neglected their camp defences and spent their nights in heedless revelry. Skleros eventually set out from the city, and divided his forces into three groups: two divisions were placed in ambush on the wooded sides of the road leading towards the Rus' camp, while another, probably some 2,000–3,000 men, was placed under himself (or Alakaseus in Skylitzes' account) and went forth to attack the Rus' host. The Byzantine detachment quickly came into contact with the Rus' army, and charged the Pecheneg contingent. The Byzantines executed a gradual orderly retreat, turning at intervals to charge back at the pursuing Pechenegs, who had thus become separated from the main body of the Rus' army. This conflict was fierce and bloody, taxing the discipline and endurance of the small Byzantine force. According to Leo the Deacon, at one point one of the Pechenegs charged Bardas himself and delivered a sword blow on his helmet, which was deflected by the metal without doing harm. Bardas' young brother Constantine came to his rescue, killing the Pecheneg. 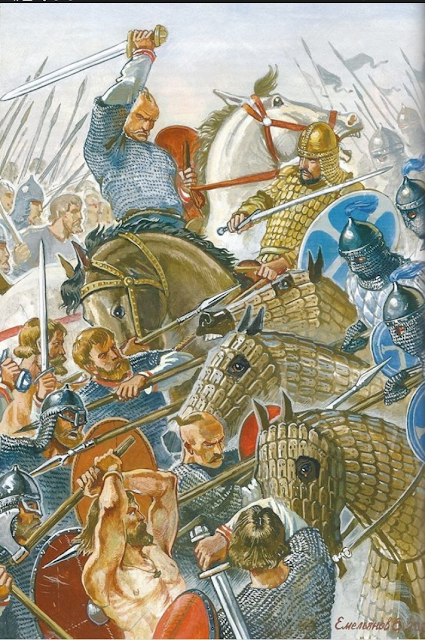 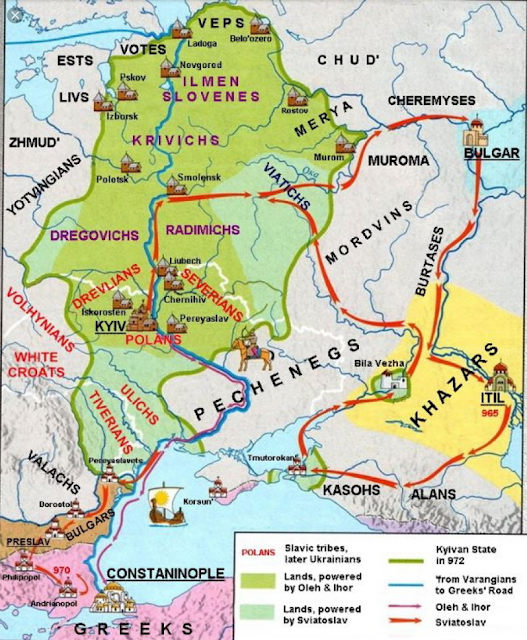 The Byzantines were unable to exploit this victory or pursue the remnants of the Rus' army, since Bardas Phokas rose in revolt in Asia Minor. Bardas Skleros and his men were consequently withdrawn to Asia Minor, whilst Sviatoslav restricted his forces to the north of the Balkan Mountains. In the spring of the next year, however, with Phokas' rebellion subdued, Tzimiskes himself, at the head of his army, advanced north into Bulgaria. The Byzantines took the Bulgarian capital Preslav, capturing the Bulgarian tsar Boris II, and confined the Rus' in the fortress of Dorostolon (Silistra). After a three-month siege and a series of pitched battles before the city walls, Sviatoslav conceded defeat and abandoned Bulgaria. In Hungarian historiography, the Battle of Arcadiopolis is considered as the final chapter of the Hungarian invasions of Europe, a series of plundering raids both westward and southward since the end of the 9th century. Following that the new Grand Prince, Géza consolidated his authority and also supported Christian missionaries from Western Europe (experiencing the fate of the Bulgarian patriarchate after John Tzimiskes's campaign against Bulgaria, when lost its independence), which led to the Christianization of the Magyars and the establishment of the Christian Kingdom of Hungary by the beginning of the new millennium
Πηγή : https://en.m.wikipedia.org/wiki/Bardas_Skleros
https://en.m.wikipedia.org/wiki/Battle_of_Arcadiopolis_(970)
Αναρτήθηκε από ΕΛΛΗΝΙΚΗ ΙΣΤΟΡΙΑ ΚΑΙ ΠΡΟΙΣΤΟΡΙΑ - GREEK HISTORY στις 12/01/2019 01:39:00 μ.μ.