The Greco-Persian Wars (Persian Wars) were a series of conflicts between the Achaemenid Empire of Persia (Iran) and Greek city-states that started in 499 BC and lasted until 449 BC. The collision between the fractious political world of the Greeks and the enormous empire of the Persians began when Cyrus the Great conquered the Greek-inhabited region of Ionia in 547 BC. Struggling to rule the independent-minded cities of Ionia, the Persians appointed tyrants to rule each of them. This would prove to be the source of much trouble for the Greeks and Persians alike. In 499 BC, the tyrant of Miletus, Aristagoras, embarked on an expedition to conquer the island of Naxos, with Persian support; however, the expedition was a debacle and, pre-empting his dismissal, Aristagoras incited all of Hellenic Asia Minor into rebellion against the Persians. This was the beginning of the Ionian Revolt, which would last until 493 BC, progressively drawing more regions of Asia Minor into the conflict. Aristagoras secured military support from Athens and Eretria, and in 498 BC these forces helped to capture and burn the Persian regional capital of Sardis. The Persian king Darius the Great vowed to have revenge on Athens and Eretria for this act. The revolt continued, with the two sides effectively stalemated throughout 497–495 BC. In 494 BC, the Persians regrouped, and attacked the epicentre of the revolt in Miletus. At the Battle of Lade, the Ionians suffered a decisive defeat, and the rebellion collapsed, with the final members being stamped out the following year. Seeking to secure his empire from further revolts and from the interference of the mainland Greeks, Darius embarked on a scheme to conquer Greece and to punish Athens and Eretria for the burning of Sardis. The first Persian invasion of Greece began in 492 BC, with the Persian general Mardonius successfully re-subjugating Thrace and conquering Macedonia before several mishaps forced an early end to the rest of the campaign. In 490 BC a second force was sent to Greece, this time across the Aegean Sea, under the command of Datis and Artaphernes . This expedition subjugated the Cyclades, before besieging, capturing and razing Eretria. However, while en route to attack Athens, the Persian force was decisively defeated by the Athenians at the Battle of Marathon, ending Persian efforts for the time being. Darius then began to plan to completely conquer Greece, but died in 486 BC and responsibility for the conquest passed to his son Xerxes. In 480 BC, Xerxes personally led the second Persian invasion of Greece with one of the largest ancient armies ever assembled. Victory over the Allied Greek states at the famous Battle of Thermopylae allowed the Persians to torch an evacuated Athens and overrun most of Greece. However, while seeking to destroy the combined Greek fleet, the Persians suffered a severe defeat at the Battle of Salamis. The following year, the confederated Greeks went on the offensive, defeating the Persian army at the Battle of Plataea, and ending the invasion of Greece. The allied Greeks followed up their success by destroying the rest of the Persian fleet at the Battle of Mycale, before expelling Persian garrisons from Sestos (479 BC) and Byzantium (478 BC). The actions of the general Pausanias at the siege of Byzantium alienated many of the Greek states from the Spartans, and the anti-Persian alliance was therefore reconstituted around Athenian leadership, as the so-called Delian League. The Delian League continued to campaign against Persia for the next three decades, beginning with the expulsion of the remaining Persian garrisons from Europe. At the Battle of the Eurymedon in 466 BC, the League won a double victory that finally secured freedom for the cities of Ionia. However, the League's involvement in an Egyptian revolt (from 460–454 BC) resulted in a disastrous defeat, and further campaigning was suspended. A fleet was sent to Cyprus in 451 BC, but achieved little, and when it withdrew the Greco-Persian Wars drew to a quiet end. Some historical sources suggest the end of hostilities was marked by a peace treaty between Athens and Persia, the Peace of Callias. The Peace of Callias is a purported treaty established around 449 BC between the Delian League (led by Athens) and Persia, ending the Greco-Persian Wars. The peace was agreed as the first compromise treaty between Achaemenid Persia and a Greek city. The peace was negotiated by Callias, an Athenian politician. Persia had continually lost territory to the Greeks after the end of Xerxes I's invasion in 479 BC. The exact date of the treaty is debated, although it is usually placed after the Battle of the Eurymedon in 469 or 466 or the Battle of Cypriot Salamis c. 449. The Peace of Callias gave autonomy to the Ionian states in Asia Minor, prohibited the encroachment of Persian satrapies within three days march of the Aegean coast, and prohibited Persian ships from the Aegean. Athens also agreed not to interfere with Persia's possessions in Asia Minor, Cyprus, Libya or Egypt (Athens had recently lost a  greek fleet in Nile aiding an Egyptian revolt against Persia).
Πηγή: https://en.m.wikipedia.org/wiki/Greco-Persian_Wars
https://en.m.wikipedia.org/wiki/Peace_of_Callias 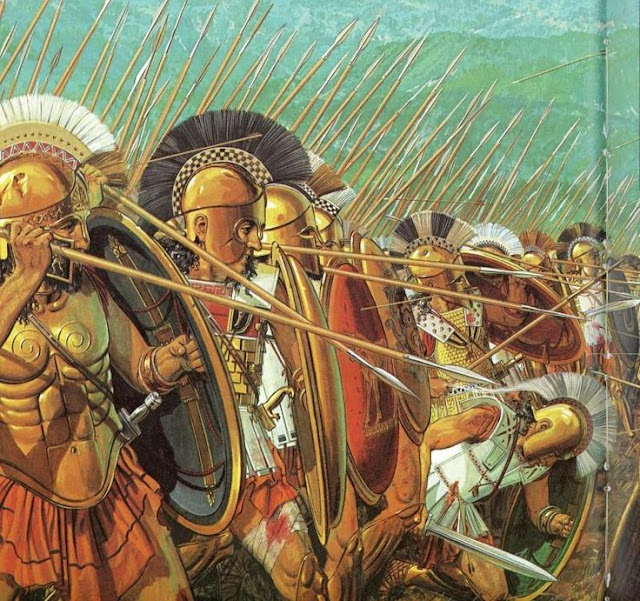 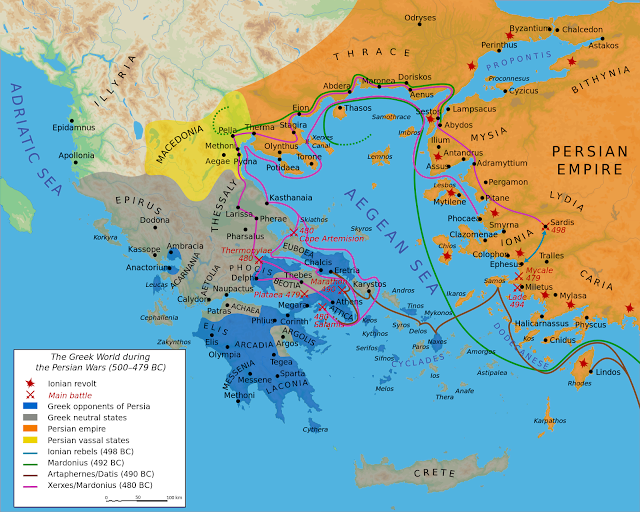