The legend tells that when the Ottomans entered the city, an angel rescued the emperor, turned him into marble and placed him in a cave under the earth near the Golden Gate, where he waits to be brought to life again to conquer the city of Constantinople back for Christians. While serving as ambassador to Russia in February 1834, Ahmed Pasha presented Tsar Nicholas with a number of gifts, including a jewel-encrusted sword supposedly taken from Constantine XI's corpse. Constantine XI's legacy was used as a rallying cry for Greeks during their war for Independence with the Ottoman Empire. Today the Emperor is considered a national hero in Greece. During the Balkan Wars and the Greco-Turkish War, under the influence of the Megali Idea, the name of the then-Greek king, Constantine, was used in Greece as a popular confirmation of the prophetic myth about the Marble King who would liberate Constantinople and recreate the lost Empire. Constantine Palaiologos' legacy is still a popular theme in Greek culture. The well known contemporary composers Apostolos Kaldaras and Stamatis Spanoudakis have written elegies for the Marble King. Some Eastern Orthodox and Greek-Catholics consider Constantine XI a saint (or a national martyr  or ethnomartyr, εθνομάρτυρας). However, he has not been officially
canonized by either Church, partly due to controversy surrounding his personal religious beliefs and partly because death in battle is not normally considered a form of martyrdom by the Orthodox Church. An Orthodox martyr is one who voluntarily accepts death for his faith, typically in a situation where he has the option to give up Christianity and live, but chooses death instead. The Megali Idea (Μεγάλη Ιδέα, "Great Idea") was an irredentist concept of Greek nationalism, that expressed the goal of establishing a Greek state that would encompass all ethnic Greek-inhabited areas, including the large Greek populations which, after the Greek War of Independence (1830) from the Ottoman Empire, were still under Ottoman occupation. The term appeared for the first time during the debates of Prime Minister Ioannis Kolettis with King Otto that preceded the promulgation of the 1844 constitution. This was a visionary nationalist aspiration that was to dominate foreign relations and, to a significant extent, determine domestic politics of the Greek state for much of the first century of independence. The expression was new in 1844 but the concept had roots in the Greek popular psyche, nurtured as it was by old hopes of liberation from Turkish rule and imperial (Byzantine) restoration. The Megali Idea implied the goal of reviving the Eastern Roman (Byzantine) Empire, by establishing a Greek state, which would be, as ancient geographer Strabo wrote, a Greek world encompassing mostly the former Byzantine lands from the Ionian Sea to the west, to Asia Minor and the Black Sea to the east and from  Thrace,
Macedonia and Epirus to the north, to Crete and Cyprus to the south. This new state would have Constantinople as its capital: it would be the "Greece of Two Continents and Five Seas" (Europe and Asia, the Ionian, Aegean, Marmara, Black and Libyan seas, respectively).
The Megali Idea dominated foreign policy and domestic politics of Greece from the War of Independence in the 1820s through the Balkan wars in the beginning of the 20th century. It started to fade after the defeat of Greece in the Greco-Turkish War (1919-1922) and the Great Fire of Smyrna in 1922, followed by the Population exchange between Greece and Turkey in 1923. Despite the end of the Megali Idea project in 1922, the Greek state expanded five times in its history, either through military conquest or diplomacy. After the creation of Greece in 1830, the Ionian Islands (1864), Thessaly (1881), Macedonia, Crete,southern Epirus and the Eastern Aegean Islands (1913), Western Thrace (1920) and the Dodecanese (1947) were annexed and became Greek territory. Though the Byzantine Empire was Roman in origin and was called the "Roman Empire" by its inhabitants in antiquity, it became Hellenistic with time to the point where Greek replaced Latin as the official language in AD 610, owing to its location (in the Greek-speaking realm and sphere of influence) and the fact that, following the fall of the Western Roman Empire, it became the eastern continuation of the Roman Empire. Byzantium held out against the invasions of the centuries with a vitality that the Western Roman Empire lost, repelling the Visigoths, the Huns, the Avars, the Slavs, the Bulgarians, the Russians, the Saracens, the Serbs, the Mongols and finally the Turks (during the first siege). Constantinople, the capital of Byzantium, fell to the Fourth Crusaders and Venetians, in the early years of the 13th century(1204ad). The city was eventually liberated by the Empire of Nicaea, a Byzantine successor, and the Empire was restored(1260ad). However, the city fell to a different foe in 1453—the Ottoman Turks—and this fall of Constantinople marked the nadir of Byzantine civilization; the city was comprehensively sacked and looted; the Hagia Sophia was turned into a mosque. Following the conquest of Constantinople, the capture of the remainder of the Byzantine territories was easily accomplished by the Ottomans.
Πηγη: https://en.m.wikipedia.org/wiki/Constantine_XI_Palaiologos
https://en.m.wikipedia.org/wiki/Megali_Idea 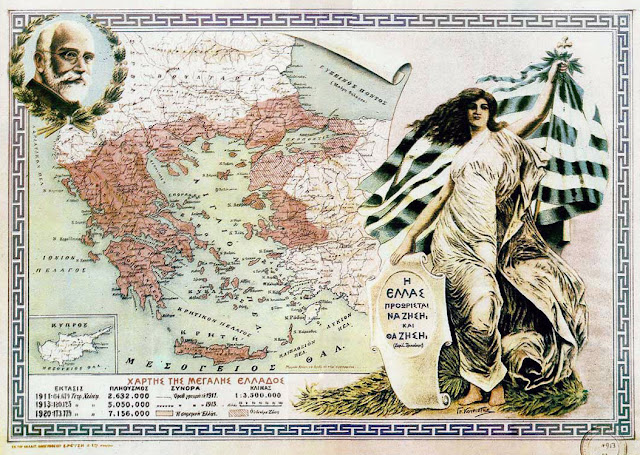