Alaric of Visigoths : The barbarian who destroyed Grecoroman civilisation

Alaric I (Alareiks - "supreme chief" 370 - 410) was the first King of the Visigoths from 395–410, son of chieftain Rothestes. Alaric is best known for his sack of Rome in 410, which marked a decisive event in the decline of the Roman Empire. Alaric began his career under the Gothic soldier Gainas and later joined the Roman army. Alaric's first appearance was as the leader of a mixed band of Goths and allied peoples who invaded Thrace in 391 and were stopped by the Roman General Stilicho. In 394 he led a Gothic force of 20,000 that helped the Eastern Roman Emperor Theodosius defeat the Frankish usurper Arbogast at the Battle of Frigidus. Despite sacrificing around 10,000 of his men, Alaric received little recognition from the Emperor. Disappointed, he left the army and was elected reiks of the Visigoths in 395, and marched toward Constantinople until he was diverted by Roman forces. He then moved southward into Greece, where he sacked Piraeus (the port of Athens) and destroyed Corinth, Megara,Argos, and Sparta. As a response, the Eastern emperor Flavius Arcadius appointed Alaric magister militum ("master of the soldiers") in Illyricum. In 401 Alaric invaded Italy, but he was defeated by Stilicho at Pollentia (Pollenza) on April 6, 402. A second invasion that same year also ended in defeat at the Battle of Verona, though Alaric forced the Roman Senate to pay a large subsidy to the Visigoths. During Radagaisus' Italian invasion in 406, Alaric remained idle in Illyria. In 408, Western Emperor Flavius Honorius ordered the execution of Stilicho and his family, amid rumours that the general had made a deal with Alaric. Honorius then incited the Roman population to massacre tens of thousands of wives and children of foederati Goths serving in the Roman military. Subsequently, around 30,000 Gothic soldiers defected to Alaric, and joined his march on Rome to avenge their murdered families. Moving swiftly along Roman roads, Alaric sacked the cities of Aquileia and Cremona and ravaged the lands along the Adriatic Sea. The Visigothic leader thereupon laid siege to Rome in 408. Eventually, the Senate granted him a substantial subsidy. In addition, Alaric forced the Senate to liberate all 40,000 Gothic slaves in Rome. Honorius, however, refused to appoint Alaric as the commander of the Western Roman Army, and in 409 the Visigoths again surrounded Rome. Alaric lifted his blockade after proclaiming Attalus as Western Emperor. Attalus appointed him magister utriusque militiae ("master of both services") but refused to allow him to send an army into Africa. Negotiations with Honorius broke down, and Alaric deposed Attalus in the summer of 410, and besieged Rome for the third time. Allies within the capital opened the gates for him on August 24, and for three days his troops sacked the city. Although the Visigoths plundered Rome, they treated its inhabitants humanely and burned only a few buildings. Having abandoned a plan to occupy Sicily and North Africa after the destruction of his fleet in a storm, Alaric died as the Visigoths were marching northward. Alaric struck first at the eastern empire. He marched to the neighborhood of Constantinople but, finding himself unable to undertake a siege, retraced his steps westward and then marched southward through Thessaly and the unguarded pass of Thermopylae into Greece. The armies of the eastern empire were occupied with Hunnic incursions in Asia Minor and Syria. Instead, Rufinus attempted to negotiate with Alaric in person, which only aroused suspicions in Constantinople that Rufinius was in league with the Goths. Stilicho now marched east against Alaric. According to Claudian, Stilicho was in a position to destroy the Goths when he was ordered by Arcadius to leave Illyricum. Soon after, Rufinus' own soldiers hacked him to death. Power in Constantinople now passed to the eunuch Chamberlain Eutropius. Rufinus' death and Stilicho's departure gave free rein to Alaric's movements; he ravaged Attica but spared Athens, which capitulated at once to the conqueror. In 396, he wiped out the last remnants of the Mysteries at Eleusis in Attica, ending a tradition of esoteric religious ceremonies that had lasted since the Bronze Age. Then he penetrated into the Peloponnesus and captured its most famous cities - Corinth, Argos, and Sparta selling many of their inhabitants into slavery. Here, however, his victorious career suffered a serious setback. In 397 Stilicho crossed the sea to Greece and succeeded in trapping the Goths in the mountains of Pholoe, on the borders of Elis and Arcadia in the peninsula. From there Alaric escaped with difficulty, and not without some suspicion of connivance by Stilicho, who supposedly had again received orders to depart. Alaric then crossed the Gulf of Corinth and marched with the plunder of Greece northward to Epirus. Here his rampage continued until the eastern government appointed him magister militum per Illyricum, giving him the Roman command he had desired, as well as the authority to resupply his men from the imperial arsenals.
Πηγή: https://en.m.wikipedia.org/wiki/Alaric_I 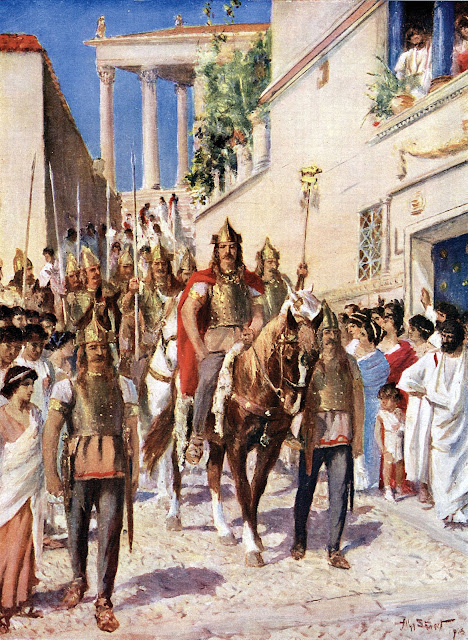