Flavius Stilicho, (365-408), regent (394–408) for the Roman emperor Honorius and one of the last great Roman military commanders in the West. He fought in several campaigns against the barbarians, opposing the invading Visigoths under Alaric in the Balkans and Italy and repelling an Ostrogothic invasion of Italy in 406. Stilicho was half-Roman, half-Vandal by birth. Making the army his career, in 383 he served on an embassy to the Persian king Shāpūr III, afterward marrying Serena, the favourite niece of the emperor Theodosius. He was appointed count of the domestics (commanding the Emperor’s household troops) c. 385 and then, in or before 393, master of both services (commander in chief of the army), an office he held until his death. Little is known of Stilicho’s military exploits before 395. He became the enemy of Flavius Rufinus, because of a difference of opinion about the treatment of some barbarian invaders in 389. Before his death Theodosius appointed Stilicho to be the guardian of his son Honorius in the West and Rufinus to be the guardian of his son Arcadius in the East. Stilicho had a great military advantage over his rival, for the army Theodosius had assembled to crush the usurper Eugenius was still concentrated in the West under Stilicho’s command when Theodosius died. Before either Stilicho or Rufinus could attack the other, the Visigoths, a Germanic tribe living in Lower Moesia, in Thrace, who had suffered severe losses in the campaign against Eugenius, rebelled under the leadership of their chieftain Alaric and began to devastate Thrace and Macedonia. Stilicho, who claimed for the Western government the prefecture of Illyricum, which was disputed between the emperors, went with his army to Thessaly. About to engage Alaric there, however, he was ordered by Arcadius, acting on Rufinus’ advice, to send a number of his troops to Constantinople. Stilicho obeyed and thus enabled Alaric to penetrate into Greece, but the troops sent to Constantinople murdered Rufinus there on Nov. 27, 395. The gifted poet Claudian began to publish his poems in praise of Stilicho, an important source of information about the politics of the time until 404, when the poet apparently died. In 397 Stilicho took another army to Greece but failed again to bring Alaric to battle and withdrew to Italy. Stilicho invade in Peloponnese, to protect the Roman citizens of Greece from Visigoths. Alaric had a vision to settle permanently in Greece and create a Germanic Kingdom in Roman region with Greek population. Stilicho surrounded the Visigothic army in Foloe mountain of north-western Peloponnese, in Elia. Then came to an agreement with the barbarians. The Visigoths left Greece, moving north to Illyria through Epirus and settled there. Then, Stlicho left Greece, leaving a free greek regions back to the Eastern Roman Empire. He saved Greece from great fatal barbaric danger. In that same year, Gildo, the count of Africa, rebelled against the Roman government and refused to allow African grain ships to sail to Rome. Stilicho promptly imported grain from Gaul and Spain. In the following year he sent Gildo’s brother, Mascezel, to Africa with an army, and he easily overthrew Gildo and put him to death; but Mascezel died soon afterward, and Stilicho was suspected of having had him murdered so that he might not become a rival. In 398 Stilicho’s daughter Maria was married to the emperor Honorius, and Stilicho himself became consul in 400. In 401 when Alaric and the Visigoths invaded Italy and threatened Milan, where Honorius was living, Stilicho summoned troops from the Rhine frontier and from Britain to strengthen his army, and in 402 he engaged the Goths at Pollentia (Pollenzo, near modern Bra). The battle, fought on Easter Sunday, April 6, resulted in an incomplete victory for Stilicho, but he captured the Gothic camp. Alaric then marched toward Etruria, but after negotiations he agreed to withdraw from Italy. In 403, however, he reentered Italy and attacked Verona. Stilicho once more engaged him successfully and pursued him northward. Again an understanding was reached, and Alaric, though his army was in bad condition, was allowed to escape. Late in 405 Italy was menaced by new invaders, a vast host of Germans, mainlyOstrogoths, led by a pagan called Radagaisus. Contemporary accounts numbered them in the hundreds of thousands, though any such figure is impossible. They attacked Florence, but Stilicho compelled their withdrawal to Fiesole, where he cut off their supplies and massacred them. Radagaisus was executed on Aug. 23, 406, and, in celebration, a triumphal arch was erected at Rome. Stilicho had never abandoned his plans to annex Illyricum, and in 407 he put them into operation. He closed the ports of Italy to all Eastern ships, instructed Alaric to hold Epirus for Honorius, and himself prepared to cross the Adriatic. But a false report reached him that Alaric was dead, and then he heard of the revolt of Constantine in Britain. Once more his plans had to be abandoned. Alaric then marched to the province of Noricum (roughly central Austria) and demanded compensation for the trouble he had been put to. His price was high—4,000 pounds (in weight) of gold—but despite considerable opposition Stilicho persuaded the Roman Senate to pay it. By this time the empress Maria had died, but early in 408 Honorius married another daughter of Stilicho, Thermantia. Stilicho’s influence, however, had declined. It was rumoured that he wished to have his son Eucherius elevated to the throne. Reports reached him early in 408 that his army was disaffected. Then came news of the death of the Eastern emperor, Arcadius, and Stilicho proposed to go to Constantinople. A certain Olympius, a palace official, spread the rumour that Stilicho was preparing to put his own son on the Eastern throne, and so the troops in Tictinum (Pavia) killed nearly all of the officials present on August 13. Stilicho went to Ravenna but was imprisoned by Honorius’ orders. He was beheaded on August 22; Eucherius was put to death shortly thereafter.
Πηγή: http://www.britannica.com/biography/Flavius-Stilicho 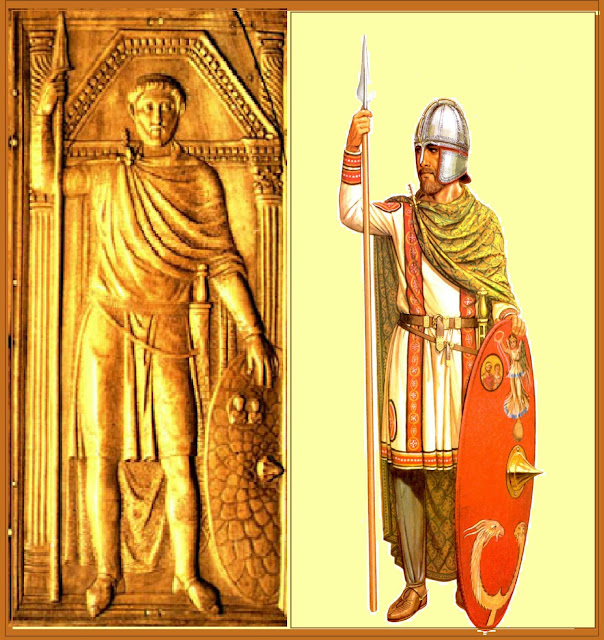