The Modern History of Greece : From the Ottoman conquest to the Greek Revolution and Contemporary Greek State

Even after the Ottoman conquest, various areas remained under Venetian control, such as the Kingdom of Candia (until 1669), the Venetian Ionian islands, various Aegean islands or short-lived occupied lands (Kingdom of the Morea, Preveza). When the Ottomans arrived, two Greek migrations occurred. First many of the Greek intelligentsia migrated to Western Europe and influenced the advent of the Renaissance. In the second migration, Greeks left the plains of the Greek peninsula and resettled in the mountains. The millet system contributed to the ethnic cohesion of Orthodox Greeks by segregating the various peoples within the Ottoman Empire based on religion.
Most of the areas which today are within modern Greece's borders were at some point in the past a part of the Ottoman Empire. This period of Ottoman rule in Greece, lasting from the mid-15th century until the successful Greek War of Independence that broke out in 1821 and the establishment of the modern Greek state in 1832, is known in Greek as Tourkokratia (Τουρκοκρατία, "Turkish rule"; "Turkocracy"). Some regions, however, like the Ionian islands, various temporary Venetian possessions of the Stato da Mar, or Mani peninsula in Peloponese didn't became part of the Ottoman administration, although the latter was under Ottoman suzerainty. The Byzantine Empire, the remnant of the ancient Roman Empire who ruled most of the Greek-speaking world for over 1100 years, had been fatally weakened since the sacking of Constantinople by the Latin Crusaders in 1204. The Ottoman advance into Greece was preceded by victory over the Serbs to its north.

First the Ottomans won the Battle of Maritsa in 1371. The Serb forces were then led by the King Vukasin Mrnjavcevic, the father of Prince Marko and the co-ruler of the last emperor from the SerbianNemanjic dynasty. This was followed by another Ottoman victory in the 1389 Battle of Kosovo. With no further threat by the Serbs and the subsequent Byzantine civil wars, the Ottomans captured Constantinople in 1453 and advanced southwards into Greece, capturing Athens in 1458. The Greeks held out in the Peloponnese until 1460, and the Venetians and Genoese clung to some of the islands, but by 1500 most of the plains and islands of Greece were in Ottoman hands. The mountains of Greece were largely untouched, and were a refuge for Greeks to flee foreign rule and engage in guerrilla warfare. Cyprus fell in 1571, and the Venetians retained Crete until 1669. The Ionian Islands were only briefly ruled by the Ottomans (Kefalonia from 1479 to 1481 and from 1485 to 1500), and remained primarily under the rule of the Republic of Venice.

Ottoman Greece was a multiethnic society as apart from Greeks and Turks, there were minorities of Jews, Italians (Venetians), Armenians, Roma (Gypsies), Slavs, etc. The Greeks with the one hand were given some privileges and freedom; with the other they were exposed to a tyranny deriving from the malpractices of its administrative personnel over which the central government had only remote and incomplete control.

Despite losing their political independence, the Greeks remained dominant in the fields of commerce and business. The consolidation of Ottoman power in the 15th and 16th centuries rendered the Mediterranean safe for Greek shipping, and Greek shipowners became the maritime carriers of the Empire, making tremendous profits. After the Ottoman defeat at the Battle of Lepanto however, Greek ships often became the target of vicious attacks by Catholic (Spanish and Maltese) pirates. This period of Ottoman rule had a profound impact in Greek society, as new elites emerged. The Greek land-owning aristocracy that traditionally dominated the Byzantine Empire suffered a tragic fate, and was almost completely destroyed. The new leading class in Ottoman Greece were the prokritoi (πρόκριτοι in Greek) called kocabaşis by the Ottomans. The prokritoi were essentially bureaucrats and tax collectors, and gained a negative reputation for corruption and nepotism. On the other hand, the Phanariots became prominent in the imperial capital of Constantinople as businessmen and diplomats, and the Greek Orthodox Church and the Ecumenical Patriarch rose to great power under the Sultan's protection, gaining religious control over the entire Orthodox population of the Empire, Greek and Slavic.

The consolidation of Ottoman rule was followed by two distinct trends of Greek migration. The first entailed Greek intellectuals, such as Basilios Bessarion, Georgius Plethon Gemistos and Marcos Mousouros, migrating to other parts of Western Europe and influencing the advent of the Renaissance. The large scale migration of Greeks to other parts of Europe, most notably Italian university cities, began far earlier, following the Crusader capture of Constantinople in 1453. This trend had also effect on the creation of the modernGreek diaspora. The second entailed Greeks leaving the plains of the Greek peninsula and resettling in the mountains, where the rugged landscape made it hard for the Ottomans to establish either military or administrative presence

The Ottomans basically installed this feudal system right over the top of the existing system of peasant tenure. The peasantry remained in possession of their own land and their tenure over their plot of land remained hereditary and inalienable. Nor was any military service ever imposed on the peasant by the Ottoman government. All non-Muslims were in theory forbidden from carrying arms. The Greek people were, however, heavily taxed by the Ottoman Empire and this tax included a "tribute of children." The Ottomans required that one male child in five within every Christian family be taken away from the family and enrolled in the corps of Janissaries for military training in the Sultan's army.There were many repressive laws, and occasionally the Ottoman government committed massacres against the civilian population. No Greek's word could stand against a Turk's in a law court. Under the Ottoman system of government, Greek society was at the same time fostered and restricted. With one hand the Turkish regime gave privileges and freedom to its subject people; with the other it imposed a tyranny deriving from the malpractices of its administrative personnel over which it exercised only remote and incomplete control. In fact the “rayahs” were downtrodden and exposed to the vagaries of Turkish administration and sometimes to the Greek landlords. The term rayah came to denote an underprivileged, tax-ridden and socially inferior population.
A secret Greek organization "Friendly Society" or "Company of Friends" (Filiki Eteria) was formed in Odessa in 1814. The members of the organization planned a rebellion with the support of wealthy Greek exile communities in Britain and the United States. They also gained support from sympathizers in Western Europe, as well as covert assistance from Russia. The organization secured Capodistria, who became Russian Foreign Minister after leaving the Ionian Islands, as the leader of the planned revolt. On March 25 (Greek Independence Day) 1821, the Orthodox Bishop Germanos of Patras proclaimed a national uprising. Simultaneous risings were planned across Greece, including in Macedonia, Crete, and Cyprus. With the initial advantage of surprise, aided by Ottoman inefficiency and the Ottomans' fight against Ali Pasha of Tepelen, the Greeks succeeded in capturing the Peloponnese and some other areas. Some of the first Greek actions were taken against Ottoman settlements Turkish and Albanian Muslim residents of the Peloponnese killed outright, and the rest fleeing the area or being deported. The Ottomans recovered, and retaliated in turn with savagery, massacring the Greek population of Chios island and other towns. This worked to their disadvantage by provoking further sympathy for the Greeks in Britain and France, although the British and French governments suspected that the uprising was a Russian plot to seize Greece and possibly Constantinople from the Ottomans. The Greeks were unable to establish a strong government in the areas they controlled, and fell to fighting amongst themselves. Inconclusive fighting between Greeks and Ottomans continued until 1825 when the Sultan sent a powerful fleet and army from Egypt to suppress the revolution. The atrocities that accompanied this expedition, together with sympathy aroused by the death of the poet and leading philhellene Lord Byron at Messolongi in 1824, eventually led the Great Powers to intervene. In October 1827, the British, French and Russian fleets, on the initiative of local commanders but with the tacit approval of their governments destroyed the Ottoman fleet at the Battle of Navarino. This was the decisive moment in the war of independence. In October 1828, the French landed troops in the Peloponnese to stop the Ottoman atrocities. Under their protection, the Greeks were able to regroup and form a new government. They then advanced to seize as much territory as possible before the Western Powers imposed a ceasefire. A conference in London in March 1829 proposed an independent Greek state with a northern frontier running from Arta to Volos, and including Euboia, Cyclades, the Saronic and Argolic Gulf, North Sporades among the islands. The Greeks were disappointed at these restricted frontiers, but were in no position to resist the will of Britain, France and Russia, who had contributed to Greek independence. By the Convention of May 11, 1832, Greece was finally recognized as a sovereign state. When the Ottomans finally granted the Greeks their independence, a multi-power treaty was formally established in 1830. Capodistria, who had been Greece's unrecognized head of state since 1828, was assassinated by the Mavromichalis family in October 1831 with the support of Western Powers . To prevent further experiments in republican government, the Great Powers, Russia, insisted that Greece be a monarchy, and the Bavarian Prince Otto, was chosen to be its first king. 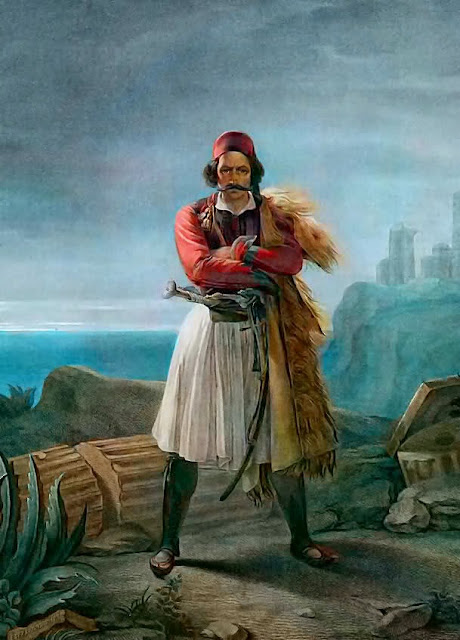 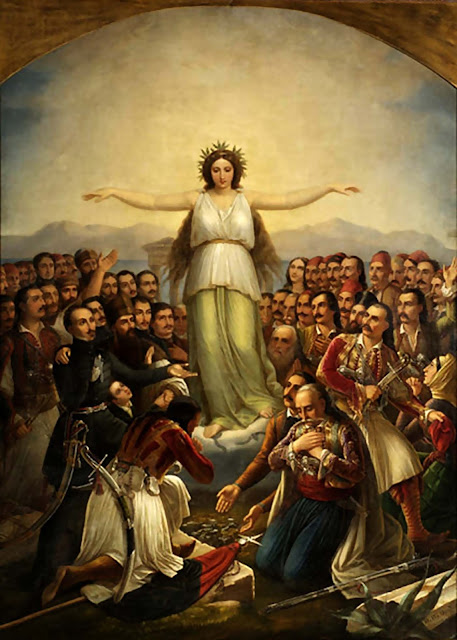 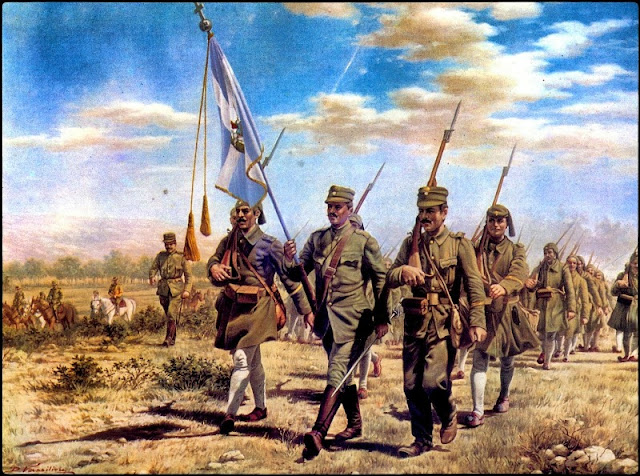 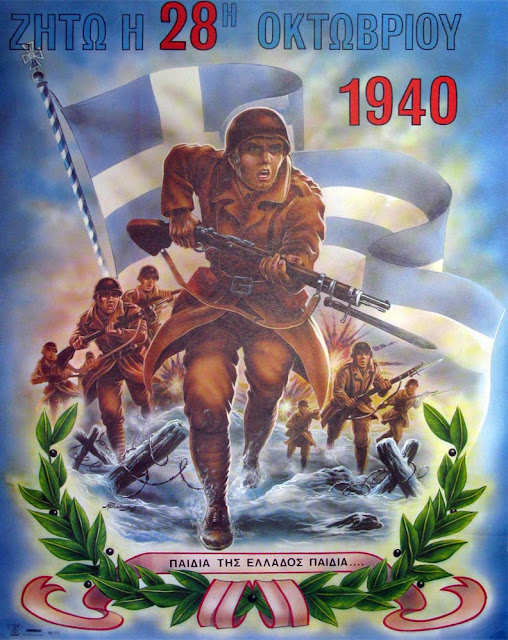