Sherden - The greek royal guard of the Egyptian Pharaoh.

The Sherden are one of several groups of "Sea Peoples" who appear in fragmentary historical and iconographic records (Egyptian and Ugaritic) from the Eastern Mediterranean in the late second millennium BCE. On reliefs they are shown carrying a round shield and spear, dirk, or sword, perhaps of Naue II type. In some cases they are shown wearing corselets and kilts, but their key distinguishing feature is a horned helmet which, in all cases but three, features a circular accouterment at the crest. At Medinet Habu the corselet appears similar to that worn by the Philistines. The Sherden sword, it has been suggested by archaeologists since James Henry Breasted, may have developed from an enlargement of European daggers, and been associated with the exploitation of Bohemian tin. Robert Drews has recently suggested that use of this weapon amongst groups of Sherden and Philistine mercenaries made them capable of withstanding attacks by chariotry, making them valuable allies in warfare, though Drews' theory has been widely criticized by contemporary scholars. The earliest known mention of the people called Srdn-w, more usually called Sherden or Shardana, is generally thought to be the Akkadian
reference to "še–er–ta–an–nu" people in the Amarna Letters correspondence from Rib-Hadda, mayor (hazannu) of Byblos, to the Pharaoh Amenhotep III or Akhenaten in the 14th century BCE. Though they have been referred to as sea raiders and mercenaries, prepared to offer their services to local employers, these texts do not provide any evidence of that association, nor do they shed light on what the function of these "širdannu-people" was at this time. The first certain mention of the Sherden is found in the records of Ramesses II (ruled 1279-1213 BCE), who defeated them in his second year (1278 BCE) when they attempted to raid Egypt's coast. The pharaoh subsequently incorporated many of these warriors into his personal guard. After Ramesses II succeeded in defeating the invaders and capturing some of them, Sherden captives are depicted in this Pharaoh's bodyguard, where they are conspicuous by their helmets with horns with a ball projecting from the middle, their round shields and the great Naue II swords, with which they are depicted in inscriptions of the Battle with the Hittites at Kadesh. Ramesses tells us, in his Kadesh inscriptions, that he incorporated some of the Sherden into his own personal guard at the Battle of Kadesh. Years later other waves of Sea People, Sherden included, were defeated by Merneptah, son of Ramesses II, and Ramesses III. An Egyptian work written around 1100 BC named Onomasticon of Amenope, documents the presence of the Sherden in Palestine. After being defeated by Pharaoh Ramsses III, in fact, they, along with other "Sea Peoples", would be allowed to settle in this territory, subject to Egyptian rule. The Italian orientalist Giovanni Garbini identified the territory settled by the Sherden in Northern Palestine as that occupied, according to the Bible, by the Israelite tribe of Zebulun where also appears a village named Sared. Archaeologist Adam Zertal suggests that some Sherden settled in what is now northern Israel. He hypothesizes that Biblical Sisera was a Sherden general and that the archaeological site at el-Ahwat (whose architecture resembles Nuraghesites in Sardinia) was Sisera's capital, Harosheth Haggoyim,  though this theory has not received wide acceptance in the scholarly community. The Sherden seem to have been one of the more prominent groups of pirates that engaged in coastal raiding and the disruption of trade in the years surrounding the 13th century BC. They are first mentioned by name in the Tanis II rhetorical stele of Ramesses II, which says in part “As for the Sherden of rebellious mind, whom none could ever fight against, who came bold-hearted, they sailed in, in warships from the midst of the Sea, those whom none could withstand; but he plundered them by the victories of his valiant arm, they being carried off to Egypt.” Some of the Sherden captured in the battle recounted in Tanis II were pressed into Egyptian service, even as shipwrights or advisers on maritime technology, a role in which have assisted in the construction of the hybrid Egyptian warships seen on the monumental relief at Medinet Habu showing the naval battle between Egyptians and Sea Peoples. Michael Wood has  suggested that their raids contributed greatly to the collapse of the Mycenaean civilization. However, while some Aegean attributes can be seen in the material culture of the Philistines, one of the Sea Peoples who established cities on the southern coastal plain of Canaan at the beginning of the Iron Age, the association of the Sherden with this geographic area is based entirely on their association with this group and the Sea Peoples phenomenon writ large, rather than on physical or literary evidence (of which almost all testifies to their presence in Egypt rather than their port of origin). Archaeologist Margaret Guido concludes the evidence for the Sherden, Shekelesh or Teresh coming from the western Mediterranean is flimsy. Guido in 1963 suggests that the Sherden may ultimately derive from Ionia, in the central west coast of Anatolia, in the region of Hermos, east of the island of Chios. It is suggested that Sardis, and the Sardinian plain nearby, may preserve a cultural memory of their name. Until recently it was assumed that Sardis was only settled in the period after the Anatolian and Aegean Dark Age, but American excavations have shown the place was settled in the Bronze Age and was a site of a significant population. The theory that postulate a migration of peoples from the Eastern Mediterranean into Sardinia during the Late Bronze Age had been firmly rejected by Italian archaeologists like Massimo Pallottino  and, more recently, Giovanni Ugas, that identifies the Sherden with the indigenous Nuragic peoples. Giovanni Lilliu noted that the period in which the Sherden are mentioned in the Egyptian sources coincides with the apogee of the Nuragic civilization. In 2010 nuragic pottery had been found at Kokkinokremnos, Cyprus, a site attributed to the Sea Peoples.
https://en.m.wikipedia.org/wiki/Sherden 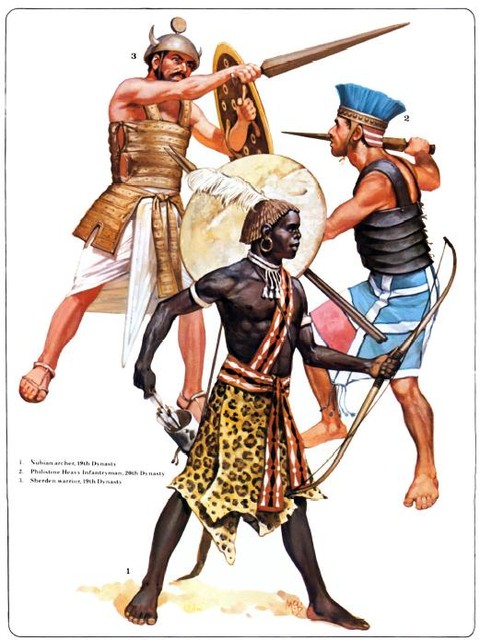