Julian, Count of Ceuta was a legendary Byzantine Christian local ruler or subordinate ruler in byzantine North Africa who had a role in the Umayyad conquest of Hispania — a key event in the history of Islam, in which al-Andalus was to have a major role, and the subsequent history of what were to become Spain and Portugal. Count Julian was "Commander of Septem" (present-day Ceuta), and according to some scholars, possibly last Byzantine Exarch of Africa. Luis García de Valdeavellano writes that, during the Umayyad conquest of North Africa, in "their struggle against the Byzantines and the Berbers, the Arab chieftains had greatly extended their African dominions, and as early as the year 682 Uqba had reached the shores of the Atlantic, but he was unable to occupy Tangier, for he was forced to turn back toward the Atlas Mountains by a mysterious person" who became known to history and legend as Count Julian. Muslim historians have referred to him as Ilyan or Ulyan, "though his real name was probably Julian, the Gothic Uldoin or perhaps Urban or Ulbán or Bulian." Julian is sometimes regarded as having been a vassal of Roderic, king of the Visigoths inHispania (modern Portugal and Spain). But Valdeavellano notes other possibilities, arguing that probably he was a berber. We are not certain whether he was a Berber, a Visigoth, or a Byzantine; as a "count" he may have been the ruler of the fortress of Septem, once part of the Visigoth kingdom; or he may have been an exarch or a governor ruling in the name of the Byzantine Empire: or, as appears more likely, he may have been a Berber who was the lord and master of the Catholic Berber tribe of the Ghomara. Indeed historically Ceuta (then called "Septem") and the surrounding territories were the last area of Byzantine Africa to be occupied by the Arabs: around 708 AD, as Muslim armies approached the city, its Byzantine governor, Julian (described as King of the Ghomara) changed his allegiance, and exhorted the Muslims to invade the Iberian Peninsula. After Julian's death, the Arabs took direct control of the city, which the indigenous Berber tribes resented. They destroyed Septem during the Kharijite rebellion led by Maysara al-Matghari in 740 AD, but Christian Berbers remained there (even if harshly persecuted in the next centuries): Ceuta is the only place in the Maghreb were Roman Africa heritage has continuously survived to our days. According to the  Egyptian  historian Ibn Abd-el-Hakem, writing a century and a half after the events, Julian sent one of his daughters to Roderic's court at Toledo for education (and as a gauge of Julian's loyalty) and Roderic subsequently made her pregnant. When Julian learned of the affair he removed his daughter from Roderic's court and, out of vengeance, betrayed Hispania to the Muslim invaders, thus making possible the Umayyad conquest of Hispania. Later ballads and chronicles inflated this tale, Muslims making her out an innocent virgin who was ravished, Christians making her a seductress. In Spanish she came to be known as la Cava Rumía. Musa was initially unsure of Julian's project and so in July 710 directed Tarif ibn Malluk to lead a probe of the Iberian coast. Legend says that Julian participated as a guide and emissary, arranging for Tarif to be hospitably received by supportive Christians—perhaps Julian's kinsmen, friends, and supporters—who agreed to become allies in the contemplated battle for the Visigothic throne. The next summer Julian provided the ships to carry Muslim troops across to Europe. Julian also briefed Tariq, their general. Then the latter left Julian behind among the merchants and crossed the Strait of Hercules with a force of some 1,700 men. He landed at Gibraltar (Jebel Tariq in Arabic) on April 30, 711, and thus began the Umayyad conquest of Hispania. Later, in the Battle of Guadalete on July 19, Roderic's army of around 25,000 men was defeated by Tariq's force of approximately 7,000, largely due to a reversal of fortune when the wings commanded by Roderic's relatives Sisbert and Osbert deserted or switched sides—which legend would later attribute to a deliberate plan developed by Julian. Afterwards Julian was apparently granted the lands he was promised by the Muslims but, as the story goes, lived on friendless and full of guilt for having become a traitor to his kingdom.
Πηγη: https://en.m.wikipedia.org/wiki/Julian,_Count_of_Ceuta 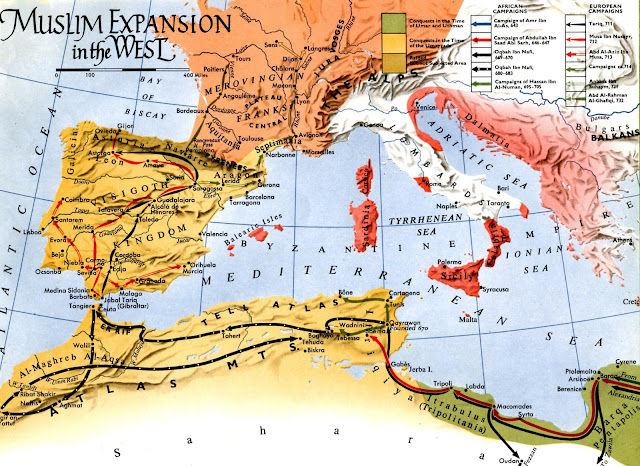