Xanthippus (Ξάνθιππος) was a Spartan mercenary general hired by the Carthaginians to aid in their war against the Romans during the First Punic War. He trained Carthaginian soldiers and led them into the battle of Tunis, where Carthaginian forces routed the Roman expeditionary force and captured the Roman consul Marcus Atilius Regulus in 255 BC. Xanthippus is credited with the Carthaginian formation, cavalry split between the two wings, mercenary infantry on their right, with a hastily raised phalanx of civilians in the centre and a line of elephants in front of the infantry, which defeated the Romans formed in their normal formation, with the outnumbered cavalry on the wings and legionary infantry in the centre. He also realised the mistakes the Carthaginians were making by avoiding open ground (because of the Romans' superior infantry) which restricted the Carthaginian cavalry and elephants (the strongest parts of their armies). Diodorus gives an account of Xanthippus' death. The Battle of Bagradas, also known as the Battle of Tunis, or the Battle of Bagradas Plains between the Roman Republic and Carthageoccurred in the spring of 255 BC during the First Punic War. The battle ended in a decisive Carthaginian victory. The mercenary general Xanthippus was hired by the city of Carthage following heavy-handed negotiations by Rome. He made the Romans fight on open ground, which allowed him to maximize the effect of the excellent Carthaginian cavalry and elephants. The Roman army under Marcus Atilius Regulus was based at Tunis. Faced by the resurgent Carthaginian army Regulus was keen to gain another victory rather than risk the chance that someone else would get the glory of eventual victory. All we have from the sources is Polybios' report that Regulus had 15,000 Infantry and 500 Cavalry when he returned home. Xanthippus is credited with the Carthaginian deployment, with a hastily raised Carthaginianphalanx in the centre, mercenary infantry on their right and a line of elephants in front of the infantry, with the elite Carthaginian cavalry split between the two flanks. The Carthaginians had 12,000 infantry, 4,000 cavalry, and 100 war elephants. The Romans had 15,000 infantry and 500 cavalry. The Romans were formed in their normal formation, with the legionary infantry in the centre and the outnumbered cavalry on the flanks. The Carthaginians started the battle with an attack by the elephants. This tied up the main force of Roman infantry. The Roman cavalry, outnumbered eight to one, was quickly defeated. Only on their left did the Romans have any success, when 2,000 troops, possibly allied troops, defeated the mercenaries facing them, and chased them back past their camp. Meanwhile, in the centre the elephant attack had been withstood, but only a few isolated units of Roman infantry managed to get past them to attempt to attack the Carthaginian phalanx, and those were quickly defeated. Finally, the Carthaginian cavalry charged the already shaken Romans from both sides, destroying what cohesion was left. Only the 2,000 troops successful earlier in the battle escaped to be rescued by the Roman fleet. After the battle of Tunis, Xanthippus stopped in the city of Lilybaeum which was besieged by the Romans. He inspired courage and led an attack defeating the Romans. Jealous of Xanthippus' success, the city betrayed him by giving him a leaky ship and he supposedly sank in the Adriatic Sea on his voyage home. For Lazenby this story is completely implausible. There is a report of a Xanthippus being made governor of a newly acquired province by Ptolemy Euergetes of Egypt in 245 BC.
Πηγη: https://en.m.wikipedia.org/wiki/Xanthippus_of_Carthage
https://en.m.wikipedia.org/wiki/Battle_of_Tunis 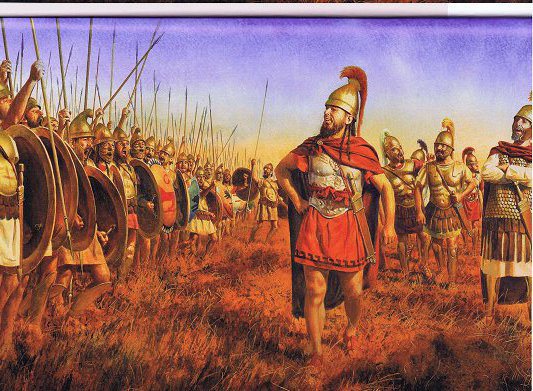