Nearchus (Νέαρχος, Nearchos; c. 360 – 300 BC) was one of the officers, a navarch, in the army of Alexander the Great. He is known for his celebrated voyage from the Indus river to the Persian Gulf following the Indian campaign of Alexander the Great, in 326–324 BC. An account of his voyage is given in Arrian's Indica, written in the 2nd century AD. A native greek of Lato in Crete and son of Androtimus, his family settled at Amphipolis  in Macedonia  at some point during Philip II’s reign (we must assume after Philip took the city in 357 BC), at which point Nearchus was probably a young boy. He was almost certainly older than Alexander, as were Ptolemy, Erigyius, and the others of the ‘boyhood friends’; so depending on when  Androtimus came to Macedonia Nearchus was quite possibly born in Crete. Nearchus, along with  Ptolemy,  Erigyius and  Laomedon, and Harpalus, was one of Alexander’s ‘mentors’ – and he was exiled by Philip as a result of the Pixodarus affair (A 3.6.5; P 10.4). It is not known where the exiles went, but they were recalled only after Philip’s death, on Alexander’s accession. After their recall, these men were held in the highest honour. Nearchus was appointed as satrap of Lycia  and Pamphylia in 334/3 BC (A 3.3.6), one of the earliest of Alexander's satrapal appointments. In 328 BC he was relieved of his post and rejoined Alexander in Bactria, bringing with him reinforcements (A 4.7.2; C 7.10.4, but does not mention Nearchus himself). After the siege of  Aornus Nearchus was sent at the head of a reconnaissance mission – especially to find out about elephants (A 4.30.5–6). In 326 BC, Nearchus was made admiral of the fleet that Alexander had built at the Hydaspes (A 6.2.3;Indica 18.10). However, his trierarchy was a financial responsibility – that is, Nearchus put up the money for the boats (Heckel, p. 229); and there were plenty of other trierarchs in the Indus fleet who were not natural born sailors. During the voyage some of the ships were damaged, and Nearchus was instructed to remain behind to oversee repairs, before continuing down the river. This perhaps indicates some knowledge of shipbuilding, but he could hardly have been the only one qualified. However, he remained in command of the fleet for the voyage from the Indus to the Persian Gulf, which he recorded in detail (and which was used extensively for Arrian’s Indica). Again, although he was the admiral, in command of the fleet, great seamanship was not required – the naval responsibilities were Onesicritus’. During the voyage, Nearchus was reputedly the first Greek commander to visit Bahrain, which was called Tylos by the Greeks. His visit marked the start of Bahrain's inclusion within the Hellenic world, which culminated in the worship of Zeus (as the Arab sun god, Shams) and Greek being spoken as the language of the upper classes. After many adventures, Nearchus arrived in Carmania, meeting up with Alexander after the latter’s crossing of the Gedrosian desert. Alexander sent him off to complete his voyage – he went as far as the Euphrates before turning back to rejoin Alexander at Susa, in early 324 BC. Nearchus married the daughter of Barsine and Mentor (A 7.4.6), and received a crown as recognition of his exertions (A 7.5.6). He then took the fleet up to Babylon, where he gave Alexander the Chaldeans’ warning not to enter the city (P 73.1–2). Nearchus had a place in Alexander’s final plans, as he was to be the admiral of the Arabian invasion fleet; but the plans were cut short by the king’s death. In the initial arguments over the rule of the empire Nearchus supported Heracles, Alexander’s son by Barsine – the king’s mistress was now his mother-in-law. Once order broke down he joined Antigonus’ camp. His last mention is as an adviser to Demetrius in 313/2 BC (D 19.69.1); what happened after that is not known, although he probably retired to write his history. Indica (Ινδική Indikí) is the name of a short book about India written by Arrian, one of the main ancient historians of Alexander the Great. The book mainly tells the story of Alexander's officerNearchus’ voyage from India to the Persian Gulfafter Alexander the Great’s conquest of the Indus Valley. However, much of the importance of the work comes from Arrian’s in depth asides describing the history, geography, and culture of the ancient Indian subcontinent. Arrian wrote hisIndica in the Ionic dialect, taking Herodotus for his literary mode. Indica is also the name of a similar book by Megasthenes that also describes the history of India and was a major source from which Arrian drew. Indica begins with a description of the geography of India, in particular focusing on the size of the rivers Indus and the Ganges, together with their tributaries. A comparison is made with the Danube and the Nile. The text then proceeds to tell the stories of Heracles and Dionysus in India. Indica also describes the classes of occupation that the Indians have and their overall social structure. The text also describes their manner of hunting (which includes a description of many of the great fauna of India) and making war. The text then moves into the story of Nearchus’ voyage from India to Babylon following the conquests of Alexander the Great. From this point onwards, the text mostly tells the story of a naval adventure. However, Arrian leaves the main story from time to time to tell in detail about the various peoples that lived along the way, as of the Ichthyophagi. Occasionally, Arrian describes  Nearchus’ soldiers’ battles with the local people. The book ends with Nearchus meeting up with Alexander the Great, who had been conducting his own land voyage from India to Susa. Nearchus is congratulated for a safe journey and rewarded for his efforts. 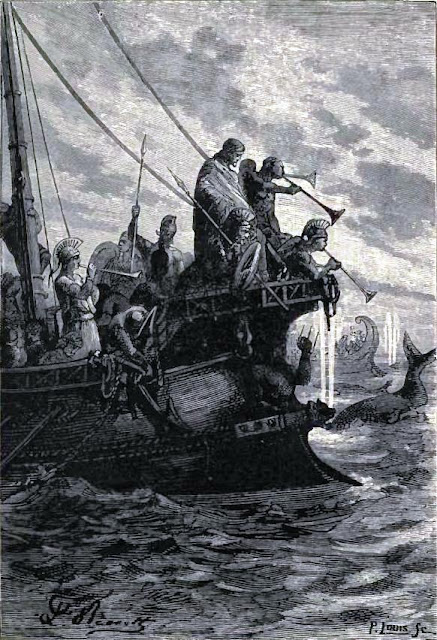