Pytheus of Massalia - The greek exporer of the Atlantic Ocean

Pytheas was an ancient explorer from Marseilles in southern France who in 330bce wrote the oldest known record of life in northern Europe.
There was nothing unique about sailing this far north, there had been a regular tin trade route between Cornwall and Europe as far back as 1500bce and African Carthaginian ships were sailing the Baltic as Pytheas set out. Pytheas’s journey is remarkable not just for fact he recorded it but because he was a true explorer chronicling the people he met and places he visited, giving an inciteful account of pre-historic northern Europe and its people.
For over a century before Pytheas set out on his adventure the Carthaginians had closed the pillars of Hercules off to the Greeks to guard their monopoly on trading with northern Europe. Pytheus’s motive for travelling was undoubtedly on a search for the Carthaginians elusive source of tin.
It is unsure how Pytheas managed to get past this blockade. One theory is he used the Viking trick of dragging/carrying a boat overland between rivers to get past Gibraltar. Also there’s a story he travelled over land to Mauretania and either transported a boat with him or built one there. Another theory on how he travelled is he didn’t have a boat at all. Being from Marseille he could probably speak at least some Gallic and simply followed the established Tin Road. He would have sailed up river with Marseille wine traders exporting wine to the Aquitanii and made his way to the Dordoyne. From there to the west coast and then picked up a trade vessel to Brittany. From Brittany he would have travelled on one of the numerous boats making the trip to Cornwall………. So he may have been the world’s first backpacker. When he arrived at the English Channel he reported slowly hugging the coast of France, stopping frequently for water and visiting the natives until after 5 days he reached the Kasiterides Islands (Britain). There he encountered an amazing site, a giant fish that squirted water from it’s back. He noted the climate change, and how people worked indoors not out unlike back home, lived in log clay houses. He journeyed to Scotland where he met a tribe called the Pretani (probably origin of the name Britain). The Pretani told him of wondrous sites and lands to the north where the sun never sets. Travelling further north he encountered dense fogs and began to see ice floating in the water and before discovering a new uninhabited land, Thule (Iceland). Pytheas then set out from Iceland until within site of the mountains of Greenland, a powerful current barred his way and drove him back to the shores of Britain (possibly the Gulf Stream). Greenland being part of the North American continent technically means he beat Leif Ericson and reduces Columbus to a Bronze medal. Pytheas returned to Greece to chronicle his discovery, but was miffed to discover no-one believed him. Greek science of the day held that the waters were frozen a lot further south than in reality, so there were no northern oceans to sail. Pytheas’s book was lost and his journey exists only in mentions by other writers who used and quoted it when writing their histories.
Pytheas’s journey to discover the legendary Tin Isles and Europe’s only major source of tin was successful and Diodorus in his history quotes Pytheas on British Tin mining.
“Those who dwell near Belerium, one of the headlands of Britain, are especially fond of strangers, and on account of their trade with the merchants they have a more civilized manner of living. They collect the tin after the earth has been skillfully forced to yield it. Although the land is stony, it has certain veins of earth from which they melt and purify the metal which has been extracted. After making this into bars they carry it to a certain island near Britain called Ictis. For although the place between is for the most part covered with water, yet in the middle there is dry ground, and over this they carry a great amount of tin in wagons. . . . Thence the merchants carry into Gaul the tin which they have bought from the inhabitants. And after a journey of thirty days on foot through Gaul, they convey their packs carried by horses to the mouths of the Rhone River.”
Πηγη: https://historyplanet.wordpress.com/2010/01/07/the-voyage-of-pytheas/ 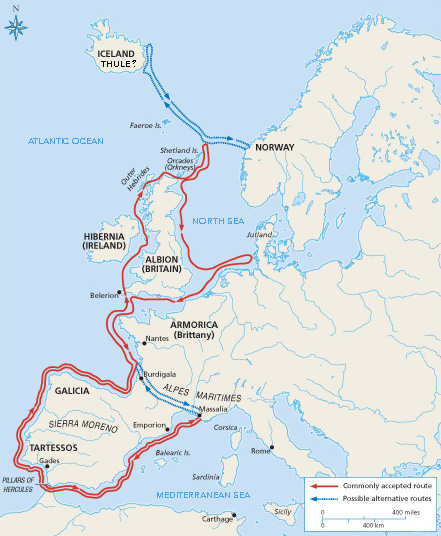