The Philistines (Plištim) were a people described in the Bible. The Hebrew term "pelistim" occurs 286 times in the Masoretic Text of the Hebrew Bible (of which 152 times in1 Samuel), whereas in the Greek Septuagint version of the Hebrew Bible, the equivalent term phylistiim occurs only 12 times, with the remaining 269 references instead using the term "allophylos" ("of another tribe"). According to Joshua 13:3 and 1 Samuel 6:17, the land of the Philistines (or Allophyloi), called Philistia, was a pentapolis in southwestern Levant comprising the five city-states of Gaza, Ashkelon, Ashdod, Ekron, and Gath, from Wadi Gaza in the south to the Yarqon River in the north, but with no fixed border to the east. The Bible portrays them at one period of time as among the Kingdom of Israel's most dangerous enemies. Biblical scholars have connected the Philistines to other biblical groups such as Caphtorim(Cretans) and the Cherethites and Pelethites, which have both been identified with Crete, and leading to the tradition of an Aegean origin. Outside of the Bible, the evidence for and origins of the Philistines are not clear and is the subject of considerable research and speculation in biblical archaeology. Since 1822, scholars have connected the Biblical Philistines with the Egyptian "Peleset" inscriptions, all five of which appear from c.1150 BCE just as archaeological references to "Kinaḫḫu" or "Ka-na-na" (Canaan) come to an end, and since 1873 comparisons were drawn between them and to the Aegean"Pelasgians".
While the evidence for these connections is etymological and has been disputed, this identification is held by the majority of egyptologists and biblical archaeologists. Archaeological research to date has been unable to corroborate a mass settlement of Philistines during the Ramesses III era.
Cities excavated in the area attributed to Philistines give evidence of careful town planning, including industrial zones. The olive industry of Ekron alone includes about 200 olive oil installations. Engineers estimate that the city's production may have been more than 1,000 tons, 30 percent of Israel's present-day production. There is considerable evidence for a large industry in fermented drink. Finds include breweries, wineries, and retail shops marketing beer and wine. Beer mugs and wine kraters are among the most common pottery finds. There is evidence  that the Philistines were originally either Indo-European-speakers from Greece and/or Luwian speakers from the coast of Asia Minor, Philistine-related words found in the Bible not be related to other Semitic languages. The Semitic elements in the language were borrowed from their neighbours in the region. For example, the Philistine word for captain, "seren", may be related to the Greek word tyrannos (thought by linguists to have been borrowed by the Greeks from an Anatolian language, such as Luwian or Lydian). Some of the Philistine names, such as Goliath, Achish, and Phicol,  are of non-Semitic origin, and Indo-European etymologies suggested. Recently, an inscription dating to the late 10th/early 9th centuries BC with two names, very similar to one of the suggested etymologies of the popular Philistine name Goliath (Lydian Alyattes, or perhaps
Greek Kalliades) was found in the excavations at Gath. The following is a list of battles purported in the Bible between the Israelites and the Philistines: The Battle of Shephelah (2 Chronicles 28:18).Israelites defeated at the Battle of Aphek, Philistines capture the Ark (1 Samuel 4:1–10).Philistines defeated at the Battle of Eben-Ezer (1 Samuel 7:3–14).Skirmish at Michmash, Philistines routed by Jonathan and his men (1 Samuel 14).Near the Valley of Elah, David
defeats Goliath in single combat (1 Samuel 17).The Philistines defeat Israelites on Mount Gilboa, killing King Saul and his three sonsJonathan, Abinadab and Malkishua (1 Samuel 31).
Hezekiah defeats the Philistines as far as Gaza and its territory (2 Kings 18:5–8).
The Sea Peoples were conjectured groups of aegean seafaring raiders, originate from Greece and western Anatolia , specifically a region of the Aegean Sea. They are conjectured to have sailed around the eastern Mediterranean and invaded Anatolia, Syria, Canaan,Cyprus, and Egypt toward the end of the Bronze Age. French Egyptologist Emmanuel de Rougé first used the term "peuples de la mer" (literally "peoples of the sea") in 1855 in a translation of reliefs at Medinet Habu documenting year 8 of Ramesses III. The term Sea Peoples, and the accompanying migration theory, were subsequently popularized by Gaston Maspero, de Rougé's successor at the Collège de France, in the late 19th century. The historical narrative is primarily drawn from seven Ancient Egyptian sources, and although in these inscriptions the designation "of the sea" appears in relation to only three groups of people (the Sherden, Shekelesh, and Eqwesh), the term "Sea Peoples" is commonly used to refer to the following nine peoples, in alphabetical order: the Denyen, identified by some with the Greek Danaoi and by others with the Israelite tribe of Dan;the Ekwesh, possibly a group of Bronze Age Greeks (Achaeans);the Lukka, an Anatolian
people of the Aegean who may have given their name to the region ofLycia and the Lycian language; the Peleset, whose name is generally believed to refer to the Philistines;the Shekelesh, identified possibly with the Italic people called Siculi (from Sicily);the Sherden, possibly
Sardinians or people of Sardis;the Teresh, i.e. the Tyrrhenians, possibly ancestors of the
Etruscans;the Tjeker, also known as the Sikil and possibly Greek Teucrians; the Weshesh. Evidence for migrations of whole peoples are not found on any of the contemporary inscriptions, but versions of a "migration hypothesis" represent a widely held interpretation among scholars of the ancient Near East.
Πηγη: https://en.m.wikipedia.org/wiki/Philistines#Economy
https://en.m.wikipedia.org/wiki/Sea_Peoples 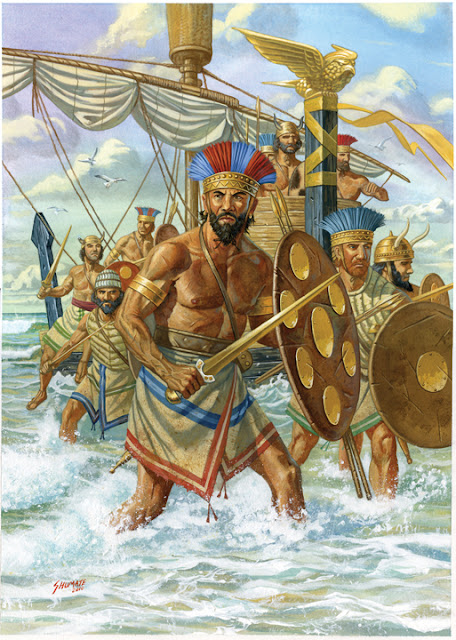